The cool thing when you’re doing a Sinatra-project (www.mathildesanting.info) is that you come across the early cats again. With Sinatra that’s unmistaken Sonny Payne, with the Basie records, but also Sinatra’s own favorite, Irving Cottler. What a drummer he is! Not only did he do a lot of the Billy May records with Frank, but he also did most of the tours in the US and Europe, for years.

And then there’s Earl Palmer, born in New Orleans, known as a great rhythm and blues- and rock and roll drummer, but don’t be mistaken: a great bigband drummer as well! You should really hear the attitude in his playing, and check out his amazing fills! (f.e. on Sinatra and Swingin’ Brass).

And I have to mention Jack Sperling here, not a Sinatra drummer, but also a West-Coaster. He’s more known for his work with Mancini, and playing Fever with Peggy Lee and Max Bennett. The time in his right hand and his crispy sound – amazing! And a couple of weeks ago I could finally get hold of the only record he ever made on his own name, called Fascinating Rhythm, and I’m very happy to have that in my collection now! 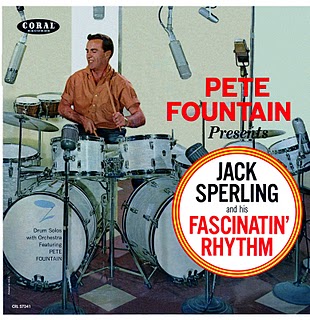