That’s gonna be a special concert! To celebrate the birth date of Boy Edgar a hundred years ago (the great dutch Big Band leader) we’ll play a tribute to the band with the Konrad Koselleck Big Band and the David Kweksilber Band. Edgar was very much know for his ability to create space in his arrangements for improvisation, something Koselleck and Kweksilber are known for too. 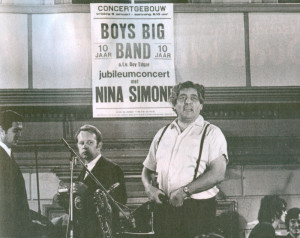 On top of that some of the original band members are going to join us, among whom the very very great John Engels! He was the drummer in the Edgar Big Band, and although everybody knows John for his combo playing – you should hear him kick ass in this band! So this one is a definate ‘be there or be irreversibly square’ (November 15th):