The month of December we’re touring the Netherlands with Ratzke’s Christmas Show. Is there anything better than to spend a musical night in the theatre around Christmas with somebody who’s rather with his audience than at home around those days?! In every town there’s a special guest, from Eric Vloeimans and Claron McFadden to Lavinia Meijer and Freek de Jonge. The rest of the show is a musical journey through all of Ratzke-land, together with his band and Fay Lovsky. Come and join us in:

Check out the dates here. 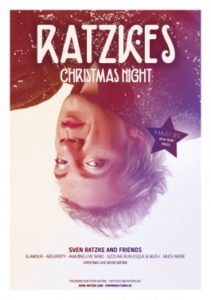